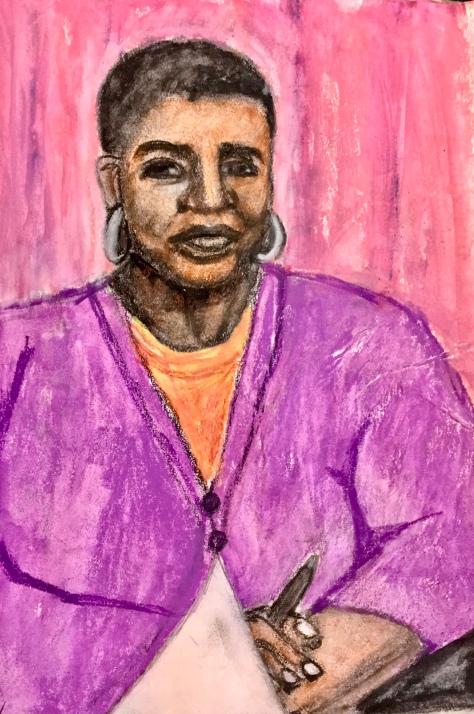 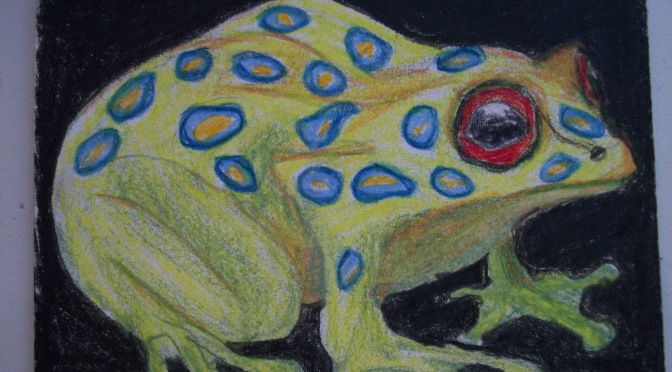 All of these “trading cards”, 2.5 inches by 3.5 inches. Many were done at Natchaug Hospital and  are original one of a kind art. They are for sale. Tell me which one(s) you would like. We can work it out. (Payment is always in art supplies equivalences, by the way. No “cash” or other monetary payments accepted.) 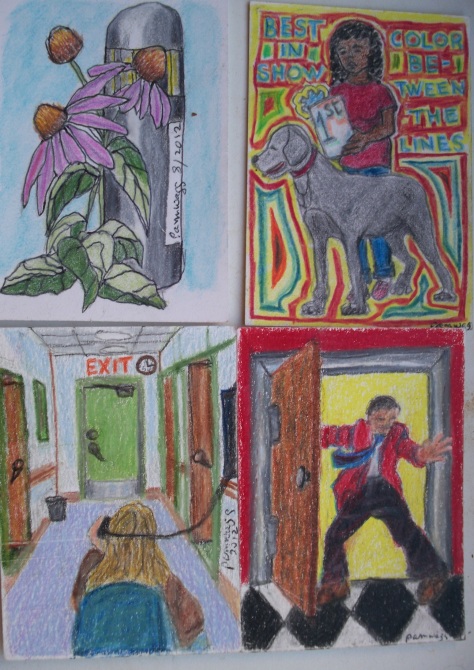 Purple Cone flowers,  Best in Show, No Exit from the Bin, and Mighty Manfred Makes an Entrance

Blue cup and Saucer; Man in Flower; Woman in ruffles with earrings 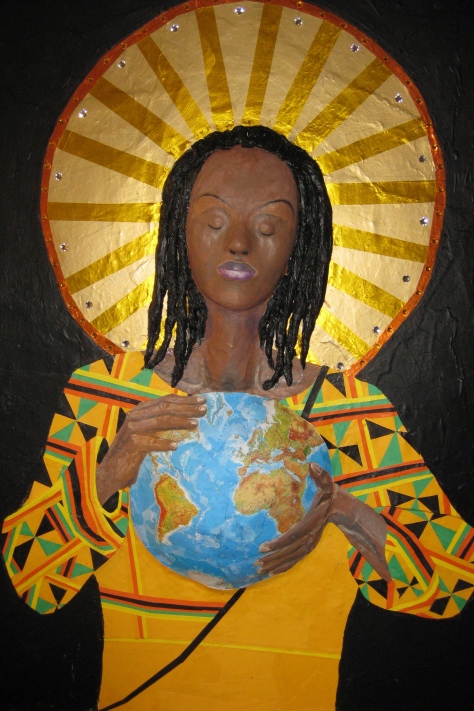 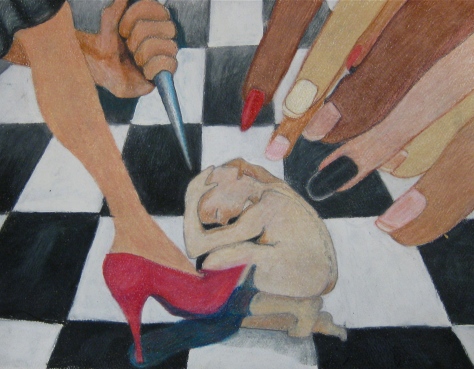 I did the last two of these at Natchaug Hospital this past winter, both of which may be obvious. The first, Under Attack from All Sides, was meant to express how I felt at the time, with the fingers pointing at me literally showing what the voices do, and the red high heel with a hand, strong, hefting that lethal looking spike — well those both belong to a certain someone I cannot name who wants me deader than dead and will do anything in her power to achieve it.

The second of the hospital pieces (I did others, but alas I gave them away and so never did have a photo of them to share…) is the last one posted here, the Ogre that Ate Manhattan, which is written partly in Spanish and partly in acronym. The message is KILL the Orgre that Ate Manhattan, but I figure you don’t need to understand that to enjoy the artwork…Not quite finished yet, but there is not a huge amount left to go…

Finally at the top is In her Hands, which is not done, though it may look it. This is a partly 3-D high relief piece, and partly a flat piece of acrylic painting. In truth a lot of it is optical illusion but not as a joke. The detail shows how her hands are painted onto the globe, not actually three dimentional at all; they just look 3-D because of how I painted them. I need to write more about more “important” things in my life, but for now this will have

to do. (Addendum: I realized, days later, that I must have written the text of this very late at night, and possibly after I’d taken my Xyrem, the narcolepsy night time med. Why? Because a great deal of it was so badly spelled and some of it made no or little sense at all. I mostly do that sort of thing, dream talk, if you will, when I make the mistake of trying to write after I have taken my medication and get busy and forget that I am not “with it” entirely…so I am not aware when sense devolves into gibberish! Forgive me, anyway, if I seemed somehow sloppy if not wholly out of it!)

Open Studio Hartford is a Hartford regional event that celebrates the arts!

This celebration of the arts combines art of all types and presents it to the community. For a full weekend in November, artists open their studios to the public or show in Hartford locations. Their wish is to inspire the community, make others aware of their work, and sell their art. Visitors enjoy the opportunity to meet local artists at studios, galleries and creative spaces in and around Hartford to browse and buy locally created art. The public also experiences live artistic entertainment at some locations!

I wanted to write a bit about the artworks that I posted yesterday without any explanation. The first one was the only one I planned in any sense of the word, and even then I cannot say I really knew what I was going to do when I started it. My process in these drawings is to simply start with an image, say, in the first one, I started by drawing an eye, and then to see where my subconscious takes me. Once I have established enough  images  – just a few usually — that are coherently related to one another on the paper (or not) then I look to see what is in the “negative” spaces, which fill up with images too. You can see this most clearly in the middle  and third works.  I know how the pictures were made, since I drew them, but in looking at them objectively now, I can see that an observer might not see anything conspicuously “unintended.” And of course, what does “unintended” mean when it comes to the subconscious?

But in the picture I will post below, this “technique” if you will, predominates. (You either like it or you hate it) I hesitate to call it a technique because that sounds like something consciously adopted, where I feel it simply reflects an unconscious change, something that happened co-incidental with Joe’s final days and then took on a life of its own after the trauma of his death. But let me post the picture I am talking about, the one that I started on the very day they took him off the ventilator, and then I will continue.

All I can say about this is that a person here is cutting the cord that is connected to a heart and a pot and is not plugged in…and the person with the scissors is a little excited by this in a way that implies pleasure…I am saying no more, except to reiterate that I drew it, or started it the day Joe died or more accurately was killed.

After that, I started doing more and more “honest” pictures, pictures where I did not try to please anyone, but was simply drawing and painting what I felt like. The next one after this one was the Beauty SLeeping with Bugs one, which was in the post yesterday. And then the self-portrait series, which began with the earlier Dead Meat one, Goon Squad: First Responders. In that notebook, I endeavor to draw only “self-portraits” though not likenesses. I am not sure what to call them, conceptual self-portraits perhaps? The second one is a very loosely drawn portrait of me as an animal, done in a different sketchy style (I haven’t photographed it or I would post it.) The third is Pam as Ornament, which I will post below, and once again I had nothing in mind when I started it, except the concept. The Santas came out of nowhere, esp the one that is only a head on a tray!

I guess I have nothing more to add for now.

I have been working on my memoir, which I have tentatively titled “BlackLight: a Memoir of Madness and One Woman’s Struggle for Recovery” — so far after only about 5 days work I have 27 pages done (more, really, just not organized and polished). Would be happy to hear any comments or suggestions for a better title (which I believe is a request I have made previously).