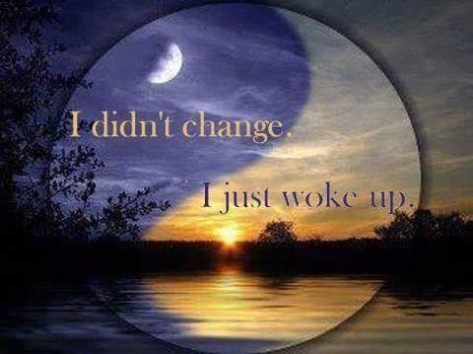 I do not know where this photo came from originally nor who made it but i obtained it from Sarah Grace Wolfram’s facebook page, so i am crediting her. In any event, what it says means the world to me.

I DID NOT CHANGE…IN FACT, MAYBE I NEVER NEEDED TO CHANGE, I JUST WOKE UP…to the fact that the world i had been living in was wrong.

I don’t know what to do. My skin is thinner than gossamer yet people think i am thick-skinned and hide-bound as a hardbound book packed with information and feeling nothing. They have no idea i feel everything from the words people speak to the experiences they have and they describe. I feel it all in and under my skin down to my marrow, i feel, how to explain the knife-edge sensitivity of my life? When Jesse blithely talked about breaking glass and stepping on it, the shard penetrating his foot, MY FOOT felt the glass pierce my arch and plunge straight up through my entire foot until it broke the skin at the top of my foot, and i had to muffle my scream of pain so i did not embarrass myself…it is always this way.

I do not “like” dogs but i feel them too. I feel them! I know where they need to be scratched under their chins and between their ears…always. And why? Because i myself feel it under my chin and between the ears. I love cats, yes. Dogs and cats both understand that i feel them. All animals know that i feel them. But it is too much for me. To feel everything and all that pain. In medical school i could not draw blood from another student because i was too inexpert at it and i felt the pain i was causing him…and despite my hardened exterior, i feel everyone’s pain and sensations, except perhaps their pleasure….i might be able to feel that too, but i distance myself from that because it feels like an intrusion on their privacy. When teddy lays his head on someone’s shoulder, i can feel that pressure on my shoulder. I do not know whether Teddy feels pleasure or relief, that is to say, viscerally, i could feel it, but i must not enter that feeling because it is too private.

I also know what people are thinking. I read people’s minds. They speak what they think to me, and i hear it out loud because they think too loud, but then i get confused between their thoughts and what only i can hear and i respond to what i heard out loud. Then things go haywire, because they say they never said such a thing, and others agree, and i look “crazy” because they did only think them. But in fact, i did hear them think it and they spoke it to me out loud with their thoughts, and my only crime was not knowing the difference and responding out loud. In such cases, they always have the benefit of plausible deniability, and i have nothing…but the truth of knowing what i know, which is that i know what is really going on.

This exquisite sensitivity is both a gift and a curse. Over the years the brutality of hospitals and “treatment” has forced me to try to ignore what i feel or at least pretend to. But things keep happening between me and others that force me to know more than i would ordinarily — if i did not have this gift/curse — want or have to know.

I was always told, “you are just paranoid” …”this is not happening”. And was made to ignore the reality of what i felt was going on around me, rather than speak about it and explore it.  But i knew it was true, it was real, it was happening. You see, i feel people too, the way i feel animals, and i understand them, and i knew that they could not bear the fact that i heard their thoughts and knew what they really thought.

i always knew it was not paranoia, just truth they needed to conceal, due to fear and other difficult emotions. So they labeled me paranoid as a way to escape from admitting that i was able in fact to read their minds….

There is more but enough for now.
.