I thought I would post a few pictures of where I have been living these past few weeks, both how it was this past summer and what it looks like now. And me, too. Since most of you likely have no idea what I look like unless you have read DIVIDED MINDS and of course those photos, the most recent in them, was the author photo taken some ten years ago in 2004.

The above photo is the cottage kitchen area and dining/arts area as they were this summer, before I brought all my stuff up here. It was much less cluttered then and lighter! Below photo is the dining and “arts” area where Lydia and I did our artwork and where most of Dr Geuss was made…

The next photo is from the summer, me holding the brown paper beginnings of Dr Geuss (actually this was when Lucy Goosey was rather far along…(trust me! ) Nevertheless if you look hard enough you will see that I am just holding the wings on — I have not yet figured out how to secure them.

As it turned out what I decided to do was to drill a hole through each wing, after Lydia and I painted them, a hole right through a painted dot, then a hole into the body (I think we decided to drill maybe three holes per side about a quarter inch in diameter. ) I sawed chopsticks from supper the night before into little dowel pieces maybe 2 inches long, then I pushed the chopstick dowels into these holes, along with glue, thereby attaching the wings permanently to the body. I thought it was a rather ingenious if not elegant solution to the problem, especially as glue and papier mache solution itself was not going to hold them in the position I wanted.

The only other way I had solved this sort of problem before had been in the out-held arm of Dr John Jumoke. Then I just “smooshed” and actually used Plaster of Paris, which I would not do again. Gypsum (P of P) would just have added weight to the held out wings of the goose, which would not have been good, nor for a sculpture that by its very nature needed to be easy to move.

Anyhow when I was done, I was very pleased when I offered it, through Cyndi my therapist to the Human Services Department in Vermont’s Northeast Kingdom (St Johnsbury) and they were nice enough to accept it.

This was not a given. Hartford’s Children’s Hospital had refused two sculptures on the pretext that they were a “fire hazard” even though for the two days they were on display there apparently they were wildly popular. 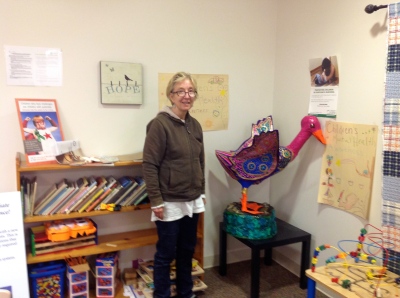 Well to finish out this saga, the photo of me with Dr GEuss above is in the children’s department where it started out, but apparently the kids wanted to “ride” it so instead my therapist there who is artistic herself made a lovely table for it, and they put it out in the front reception area for everyone to see. I was thrilled to see this when I came back and first arrived there for an appointment from The Care Bed.

The building (above) is the carriage house (or cottage) I live in, as it was last summer. The sooty part of the wall is from the pellet stove, which I am using now in the winter with great satisfaction. But even though it was nearly 0°F last night I still prefer to bundle up in clothing than to use a lot of pellets or keep the house too warm and get a headache! So I keep the stove at “1” rarely even a “2” and have not yet even turned on the upstairs electric heat…On the left, behind the bent door, is the “garage” where the farm and snow clearing equipment are kept…

This next photo is one I snapped not at all by accident of the white donkey, who looked to me just like a unicorn peering from behind the trees! I love this picture because it captures the magic of the past summer and why I fell in love with the NEK and Sheffield and this farm and its owners, Marc and Steffi, and VERMONT!!!!

I can’t recall if I posted these next few on Wagblog or only on FB but here is the farm after our first snowfall a week ago (actually it was not at all our first at all, only the first big one I was present for). We had a foot of snow at Thanksgiving again and more last night on top of this apparently unnamed “mountain”!

Finally a few photos of Wag herself in her new Vermont digs, doing her “thang.”

Pam at table drawing a small sketch before she starts painting

Pam dressed to the nines and pretending to paint for the camera…In reality I never change out of my grungy gray tee shirt and jeans, and would never paint in such good clothing!

Pam displaying results of her oil painting adventures, a picture based on a a very short book that means more to her than almost any other, THE FOUR AGREEMENTS by Don Miguel Ruiz and his newest, written with his son, THE FIFTH AGREEMENT…

Painting is “Sometimes a Dreamer has a New Dream”

Above is Pam in recliner in Vermont cottage, reading about one of her favorites artists, Alice Neel…

(Above) Kitchen area in winter time….Pam W cooking, late at night in November, 2014

You can see that since I came back from the summer it has gotten a lot more crowded….I brought as much as I could pack into a 14 foot truck and gave everything else away. Which was a lot. I donated ALL my furniture to FreeCyclers, including my bed and my recliner. ALL my books went to a teacher at the Cheshire Correctional Institute or their library, except a few precious ones, including the Alice Neel volume. And most of my other items except for art supplies and art work, and cold weather clothing and a few expensive items I knew I would not want to have to purchase anew. But most of my things had been bought at thrift store to begin with and many years ago to boot, so it would have cost more to lug them with me to Vermont than to buy them again, used, once I got settled there.

All the furniture that you see was there when I got here and belongs to the owners, Marc and Steffi. Of all that you see, only the artwork on the walls, and the easel, and the white floor three-bulb lamp are mine…

Frankly I would love to “downsize” even more than this, but do not know how (except for clothing, which is all used and while I like what I have I NEVER wear it)…I have used nearly everything I brought with me, and if I have not, it is only because Marc and Steffi have something here. However, when I go somewhere else, which may NOT be fully furnished, I know I will be glad that I did not toss everything in a fit of pique with “stuff”.

Sorry about this mundane post. I needed to make these photos for my mom, who is experiencing dementia and may not even quite know where I am. I did make taped phone calls that go out to her every night at the same time, telling her that I love her and am moving to Vermont, but I have not been able to contact her “in person” otherwise, since I cannot call her and she is no longer able to do email . So I will write her a letter and enclose these photos. I figured why not also show them to my readers…(and I hope not bore them to tears at the same time!!!

20 thoughts on “Photos of Vermont Cottage, and of the Artist, Herself” 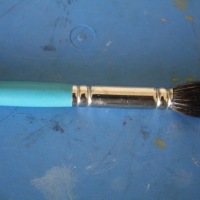